I vividly remember being stuck in bumper-to-bumper traffic on Little Rock’s I-30 bridge that sunny September morning 11 years ago. I remember hearing on the radio that a small plane had hit one of the twin towers. I immediately called my then-husband, an amateur pilot, who was already on the job at his highway department office. I said to him, “What kind of idiot can’t miss a skyscraper that big?”

Of course we all soon learned what was really happening.

I, like you, watched the television and listened to radio news reports that Tuesday and in the days and weeks that followed. We watched in disbelief and horror as the towers burned and fell, at the gaping hole and smoke left at the Pentagon, and later as we saw the smoldering crater in that field near Shanksville, Pennsylvania. When search-and-rescue turned to search-and-recovery, like you, I mourned with the families and friends coming to grips with such a senseless loss.

Like you, I gained even more respect and appreciation for first responders who run in when everyone else is running out. But maybe unlike you, I had never been to the Word Trade Center, the Pentagon or that field in Pennsylvania before the attack, so seeing those places in the news reports was a bit like watching a horror movie – not quite real.

It wasn’t until I visited the 9/11 memorial garden last year, shortly after it opened on the 10th anniversary of the attack, that it truly became real for me.

I had never stood at the bottom of the World Trade Center towers and taken in their impressive stature. I had never looked down over New York City from their observation floors. Visiting the footprints of those enormous and iconic structures that are now replaced with somber fountains, and experiencing the reverent park that surrounds them, personalized it for me. 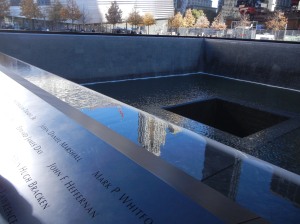 The memorial site is very quiet and peaceful, despite being in the middle of New York City. The white noise of water flowing through the enormous granite-lined pools accomplishes that – and I’m glad.

I invite you to read the post I wrote last year following the day  Kelley and I visited the Statue of Liberty, Ellis Island and the 9/11 Memorial.  Visiting those three historic sites in the same day gave me a perspective on the freedoms we American’s enjoy, what our forefathers sought here, and what was viciously attacked eleven years ago.